Books about Comedy and Humour 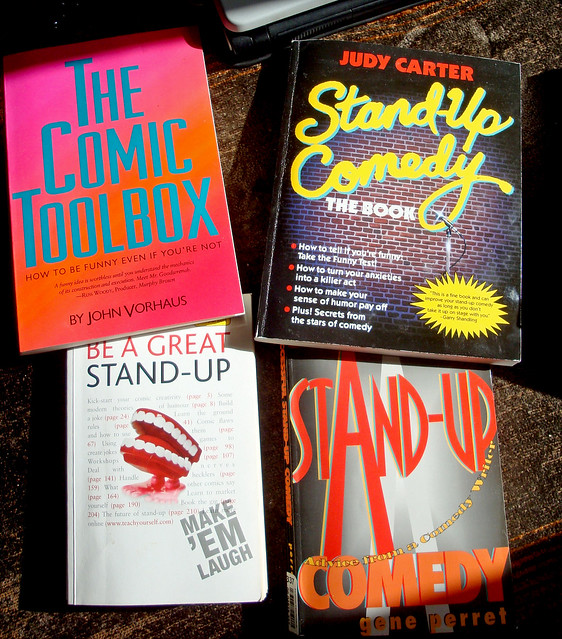 Judy Carter wrote as I know the first ever book about Standup Comedy, she wrote later another called Comedy Bible. I learned from her the importance of adding something on the top of the punchline. That "afterthought" makes it look impromptu and usually adds even a stronger laughter.

I went to two workshop with her, one in Las Vegas at my 79th birthday, a second one in Los Angeles a few month later about "how to transform your mess into message": an excellent workshop leader.

Be a great standup by Logan Murray, was the first ever book I read about standup and understood... most of it, as I was very new then. He was my second workshop leader, and I went later to his Impro workshop and also to his Comedy writer workshop in London. Excellent workshop leader.

It is interesting how much each differ from each other. I learned from Logan to look around me with Comedian Eyes! So important also in my life.

When I took this photo I only had 10 books all with different views and some new advices. Now their number has grown. If you read only two, read Logan's and Comedy Bible by Judy Carter perhaps. 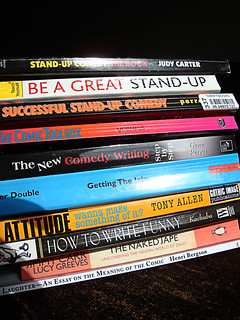 The other two books, well I do not remember also at the time reading it I liked them, all adding a new perspective to what I know each time.

But before all that books, I recommend all Toastmasters to go through the Competent Communicator manual, and if possible twice. And those who are not yet, to join a club.

What does it teaches you, in the Toastmasters club with feedback are the basic technics of any speech and plus the confidence gained through them is essential. In any speech confidence is important, but the audience feeling fear, does not laugh. And of course, the Rhetoric devices are also important in Comedy as is the body language used and voice variety.