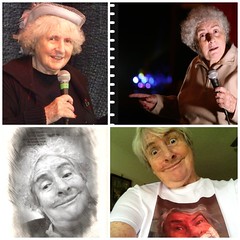 Well, I did a lot more then just gigging and standup comedy, in my 77th year.

All that while also going through Cataract Eye operation, Three teeth denture, skin face and back surgeries.

I learned to look at life, mine mostly, with comedian's eye. I learned that I do have funny bones.

Comedy Sunday at comedy school. Great teachers, comedians and meetings with others. I also measured the long way I have gone since I begun, and even more since last year.

I have taken a lot of workshops, each let me grow in different ways.

First, was the Comedy School and Standup Comedy beginners class. 2011 February / March, with a great and for me successfully showcase at Pirates Castle. I had lots of difficulty to.get along with my colleagues but learned from that a lot too. I met also the great me Cee, our main teacher, and a compère without compare, and Adam Blum, who remains still my exemple as standup, and declared me as "his friend" yesterday. He is a wonderful human being and that shines,through his comedy as he performing too.

And Ivor Dembina, whom I met last year the first time, there. Who later was one of my other influencial teachers.

Elene, a great public speaker, whom I invited come too, and who was asking 'me' advice, now!

Many others, met on the circuit, who remember me and my name and gigs.

The second school was Logan Murray's, Standup and deliver in May last year. He taught me to look at the life with 'comedian's eye'. And many other technics. I also attended later, his comedy writing class, when I felt stuck in my five minutes and wanted to broaden it up.

In fact, it was David Jones, Toastmaster and dedicated teacher who pushed me to add at least half of new material, but most important, to go out there : do at least 20 gigs. Of course, once done twenty, gone so well, we do not stop. I am now past 55. If I count only gigs and not also the Humorous storytelling that I begun to do, more and more.

Add to all that two short impro courses, and Ivor's drop in, and follow up, and all that in less then two years.

But perhaps the most learning experience was doing the circuit, the open mic, the standup, the storytelling - more and more humorous- and with each, progressing a bit, learning about places, people, compères, and colleague comedians. Baiting in laughter, winning trophies, sometimes also loosing and learning from it too.

Slowly, between two eye operations, one first three teeth denture, five skin surgery, ups and downs of my life, I learned how wonderful is to look at all with Comedian's eye, and use all that comes to me with humour. It makes laugh others, but most important, it makes my life easier to live.

I did progress from the shaky five to ten solid minutes, and to a few paid gigs, from unknown to producers asking me to come back. Understanding a lot better than at the beginning of last year, what makes laugh. Still long way to go, if I just persist and jump again on the horse back, after a few weeks absence. My face is not scarred much, most do not even realise the scars. And even if there were, I learned Keith had right when he told us at first: it is the attitude that counts.
by Julie Kertesz - me - moi - jk at 7:21 am No comments:

The first time, as we have now 12 divisions in the District 71 (England & Ireland) Toastmasters, we had Semifinals. Richard Murray, past Division H Governor passed easy to the finals with his serious and at the same time funny speach.

There is always a story

There are so many stories we can take or imagine from the street, interaction we can observe, broad on them.

Remember from them something from our life's.

On the ground, a fallen leave but it is still beautiful, as I can see myself, sometimes, even after 70 or 77!

There the flip side of a leaf, so different from the face: we all have different faces.

Lot of things that bothered us go 'down the list' as new ones arrive that are more serious or urgent : here is another story's beginning!
by Julie Kertesz - me - moi - jk at 2:57 pm No comments: