Julie77 opens at Comedy in Tooting 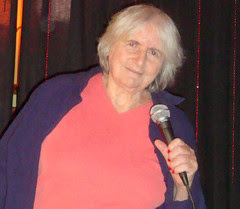 At prince of Wales pub in Tooting, with Ed great compère "compère without compère" as he told, I opened the gig yesterday night.

Opening, is supposed to be almost a "sacrificial" place, as you have to warm up the audience.

I had long high volume laughs from a great and big audience that almost got no room! some standing on the back or left!

Great night, and I learned also how much an "afterthought after the afterthought" can have impact indeed.

Thanks! I got 6 or 7 minutes, (alas no recording) but also met great people, some from old Workshops and Stand Up nights, a journalist from Real People coming specially for me. And so many more, coming to me later "I loved your gig, you had a great number!"

Alina from Stand Up and deliver got also a "give her a drink", but all numbers got laughter.
by Julie Kertesz - me - moi - jk at 12:17 pm No comments: Links to this post

This was the 15th December, one month before I came home with a cup!
by Julie Kertesz - me - moi - jk at 6:00 am No comments: Links to this post

Another speech from Ted, a great way to persuade and speak naturally, too, seems all conversational, does not show all the preparation behind it. Listening to him, observing him, one can learn a lot!

It is Rolf Hut professor, speaking at TEDxDelftabout "tinkering" but in fact, much more...

Try something new for 30 days - from Ted.com


Five minutes at the Pirate Castle in Camden, London, the end of March 2011 - about 120 audience.
Mr CEE  compere introducing me. In his intro of us, 12 from the School of Comedy, he explained to thee audience that we are all "comedy virgins"... so I added that to my act, too.

My first Stand Up performance ever.

How much Mr CEE helped all of us, and how nice he encouraged me! He also told us to use similes and perform as having a conversation with the audience.

How much I own to Toastmasters Competent Communicator manual and experience. I used that material at the end of my performance.
by Julie Kertesz - me - moi - jk at 5:08 am 2 comments: Links to this post

Julie, stand up comedy by -LiLi-
My Comedy Stand Up "Icebreaker" the first time in a real comedy club alone in London Cavendish Arms in Stockwell.
Well not "all" alone, we were a group of 5 together, but only me and Chris performed that night. As you can see, the public reacted very well, even if I would finish "could do better", but we were 23 and I was voted between the four bests. And I think between us four, two were pro comedians.

Everybody who speaks can...

If only they would have told me in my childhood! Instead of "you cannot sing, when the others sing you just move your mouth" and make me believe I do not have "ear"

Great speech, good example, makes me also say now "Everybody can tell stories!"
by Julie Kertesz - me - moi - jk at 7:34 am No comments: Links to this post