I discovered, through my son, a new feature on the web: registering and categorizing my books.

I have begun with my Public speaking, Storytelling and Stand-Up Comedy books, still more to come. Here are the latest one I put on. 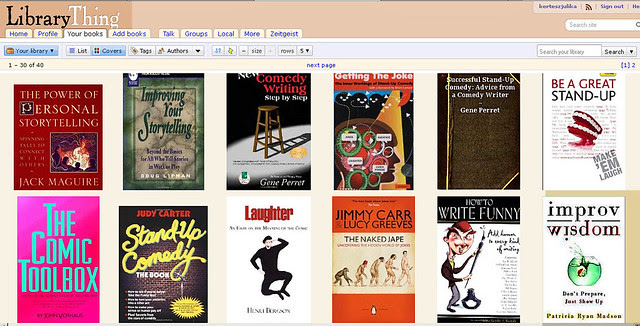 In the LibraryThing, they find the covers and exact titles, as one enters ISBN number, or title and author, and one can add tags and arrange them in categories. Plus different other things I have yet to discover! So far, more then 40 books put in, all around Communication in Public.

Of course, there is wisdom to be taken from lots of other books too!
by Julie Kertesz - me - moi - jk at 11:28 am No comments: Links to this post

Doug Lipman - between you and your audience

Your listeners don't always respond the way you
want. In this case, you respond by adjusting your telling
to produce a different response.

Whenever synch builds, the feeling of rapport builds, too.
When you are in such a state of rapport with your
listeners, your influence is magnified.

At this point, a nearly invisible raising of one corner of
your mouth, for example, may create a ripple of laughter.

But if you break the rapport, you lose the "multiplier"
effect of synch, and will need to expend more energy again
(perhaps you will need to speak louder or gesture more
broadly for a moment) to have as much effect.

Intense rapport with an audience is a highly rewarding
experience.

It requires you to maintain a precarious balance between attention
on your listeners and attention on your story.

A moment of distraction (such as when someone new enters the room or when your mind wanders) can sometimes be enough to break the spell.

Then you need to re-create it.

Learn to pay close, delighted attention to your listeners.
Learn to respond, and to swim in the currents of the
resulting endless feedback loop.

Some talked about responding to individuals:
"Tell to one listener at a time," one said. "If you can get
one person on your side, the others will follow."

Many tellers, however, described a sense of the group as a whole.
Jay O'Callahan said, "It's as though the audience offers
their energy to you so you can mold it for them. Their
energy seems to meld together above their heads.

When Pam McGrath and I give workshops called "Dancing with
the Audience," we have each participant tell a story to the
group while blindfolded. Afterwards, we ask what the teller
noticed about the audience. Most tellers describe being
more in touch with their listeners than usual. I believe
that, denied the convenience of sight, the tellers turn to
additional ways of sensing their listeners - ways that
great tellers call into play at all times.

When you connect deeply, with all your senses, to your
listeners, you form a bond of trust with them. The audience
gives you a gift of power over them. In a way,
you are like a coach driver: you are hired to direct the
horses, but the horses don't belong to you.

All this talk about connection with your audience is
necessarily a bit indirect, because the bonding happens
primarily at a subconscious level. Generally, connection is
experienced consciously only after it is established; it is
created through a myriad of adjustments, each too small and
rapid to be noticed individually.

Describing a strongly connected storytelling event, we
often use words that suggest being highly present in the
moment, such as:
- immediacy
- vibrancy
- vividness.

More commonly, though, we turn to metaphorical language to
describe the effects of linking with your audience. These
effects are difficult to analyze but unmistakeable to
experience. To describe these effects, we compare them to:
* physical force:
- powerful
- compelling
- captivating (which derives from "to make captive")
- moving
- "She had her audience in the palm of her hand."
* being engulfed or submerged:
- absorbed
- engrossed
- immersed
* the effects of magic:
- conjure
- "The teller cast a spell..."
- enchanted
- spellbound

Subscribe to Doug Lipmqn tips
Read his book
by Julie Kertesz - me - moi - jk at 9:19 am No comments: Links to this post


Some simple but very good ideas that apply not only to play writing, but different creativity, as speaking in public or storytelling, too.
by Julie Kertesz - me - moi - jk at 4:59 pm No comments: Links to this post

He won the Speakout contest this year with this humorous speech about Sleep
by Julie Kertesz - me - moi - jk at 6:49 pm No comments: Links to this post

As a film: Paula - for Grant's Whisky

Grant's True Tales : Julie from Geronimo London on Vimeo.
I told Paula's tale, the whole of it, at Canal Café Theatre during Family Theme with Spark London. Paula, my great grandmother had a huge impact on my view of life.

It does gain, in this rendering, turned by a professional filming crew, nicely edited, with some nicely inserted videos, filmed through three hours that we worked together to produce this few minutes. Very pro. And in bigger size, I like it even better then before, seen also in a tiny window.

It does loose some alas, as they did cut (with my permission), all I told initially about her childhood and even more, details about her problems as woman managing a business alone, in the years 1880th, way back. And, next time, I will not tell a tale without audience either, I missed a lot being "on the podium" with real people facing me, as it was filmed only with me and the crew.

Please go also to the Grant's Whisky Facebook site and vote for me, or, look at others and vote for them. Using True Tales as publicity is a great idea!
by Julie Kertesz - me - moi - jk at 9:32 am No comments: Links to this post