My most popular tale: The very old woman and the death


From my YouTube videos, this diaporama is the most popular, where mostly the voice is important, and of course the tale, photos by me - the sculptures by my late wonderful wise friend, Stephanie.

"The old woman and the death" Hungarian folktale was translated and adapted by me, with around 750 having listened and looked to it so far on YouTube.

Enjoy, for the end of year, and may have a similar adventure... and persistence.

I am back on the saddle! and yes, it still works.

Friday, at the Comedy workshop, not only I "killed" (made Toastmasters laugh) but after the event, in the pause, many come to tell me how much they enjoyed it.

Sunday, I proved to myself that I am no more intimidated by video, and volunteered to give a 7 minutes speech on-line to Toastmasters listening, looking from all over the world. Yes, they laughed from Australia all the way to an island near Vancouver, Canada! Philippines, Japan, South Africa... I did use the project 6 from the Competent Communication manual, Voice Variety, with the title "we all have funny bones". Carole, our VPE from Australia was the Toastmaster at that meeting and said "I have to recover from laughter" and my performance was evaluated by Brian from Vancouver. 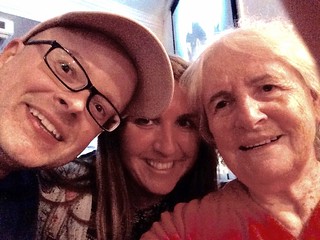 Monday, I was given 10 minutes in a London Standup Comedy Club located now at Horse and Stable. Yes! I could go up the stairs. Then, give my old material combined with some new.

Wonderful audience response: long, strong, many laughs and even applauses. For the first time, since I gig, an audience member asked me after my performance to take a photo with him (he was there with his wife also to gig). Well, I was impressed.

Here is Chris from my Toastmasters club and his pal, also posing with me in the pause. He is also a Standup Comedian, and also a Meetup leader, he come to "show my gig to her" and to encourage my comeback.

Still have to work on my skill, remember better some of the lines, find where to add the new material I found, but I am back on the saddle, ready to roll again after a whole year. These three performances remembered me why I do it, the joy of audience response and the message that is under my appearance.