Standing up to a bully

Amy Saidman hosts My So Called Jewish Life from SpeakeasyDC on Vimeo.

And there are so much more great stories and storyteller I found there!

SpeakeasyDC hosts a monthly open mic storytelling series on the 2nd Tuesday of every month in Washington, D.C.
by Julie Kertesz - me - moi - jk at 1:39 pm No comments:

Listen, open up with all your body


Fascinating Ted conference, about listening with our whole body and soul.
First listening to ourselves then to the instrument then to the others.
Relating and say something not only interpret... every time differently.

All of us, depending what we are willing to experience.
by Julie Kertesz - me - moi - jk at 7:43 am No comments:

Truth and a story 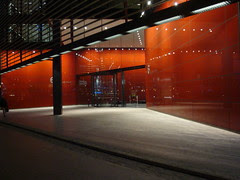 Yesterday, I did entretain the audience, but not well enough.

The truth, came into my story, instead of the creativity and also they did laugh at my cape and movements and were with me from begining to the end, I could have told a more amusing story of how Dracula did not die, just disapeared and took another of his forms at the end of Bram Stoker's book.

I play now with the idea.

Using all I know, read, seen, people thinks about him, making up a new story, of him reappearing in today's London, near the London Bridge...

There are so many deguisements and way of dressing at the evening, that even if het appeared first in his old clothes, until he purchased new ones, to get less remarqued between unsuspecting Londoners, no one would notice!

Yes, why let him be non existent or killed, when so much fun and adventure can still go on...
by Julie Kertesz - me - moi - jk at 6:43 am No comments:

Mistaken Identity from Julie Kertesz on Vimeo.
this spectacle was the one that decided me to learn more about humour, to understand why the audience did laugh at cetain points, what provoced laughter
by Julie Kertesz - me - moi - jk at 3:40 pm No comments:

Audacity is a free voice / sound Editing software. I discover with time more and more use of it.

Not only you can copy and paste, cut and add, in this case below shorten from 12 to 6 minutes cutting out all the non essential parts, becoming more aware what is not absolutely necessary for that most important message you want to give "now" the next time you tell it, but also has many other features.

You can 'find the noise" and then reduce the noise from all the audio file.

One can amplify or reduce the sound but also 'see' the voice variaty and add or reduce pauses. And of course, listen to the parts when the audience laughed... and think about it why. Sometimes it is not in the voice but the mimic and body language but you can remember that, or see if you have a video recorded too as I had in this case.


That is the last version, of Multiple Identities, - originally Mistaken Identity told at Cafe Canal Theatre, only 6 minutes of the original 12! but still, I think all what is important is still there!

So much more can be changed about which I do not know yet, but already using some basic features can mean a lot for the result. And after all the changes, one can Export in uploadable format to the web and embed it from there, like I am doing now here.

And this wonderful and free Audacity exist as well for Macintosh as for PC computers!
by Julie Kertesz - me - moi - jk at 8:17 am No comments:

Busy month of March for me 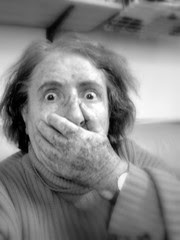 Monday, the 7th for the Family theme with Spark London at Canal Cafe Theatre, near Little Venice.

I told some of the true stories about my Grand great-mother, Paula.Done! "Dramatic entertaining". She was 92 and I was 12 when she told me most of her stories. Now, at 77 I tell them to my 12 year old grand-daughter to transmit them through 6th generation. Not only the family stories but also the believe that she transmitted me: from bad things something good arises.

Wednesday, 16th at Lewisham speakers, I will speak about the Going outside the Club, and how by daring to fail; experiment and stretch comfort zone, I learned and come to become a Storyteller.

Friday, 25th at the Bermondsey Square bookshop with 20 pictures and a ten minute story at the True Story cafe event. The theme is Time, for me stays or flies but is not regular as a clock would be. 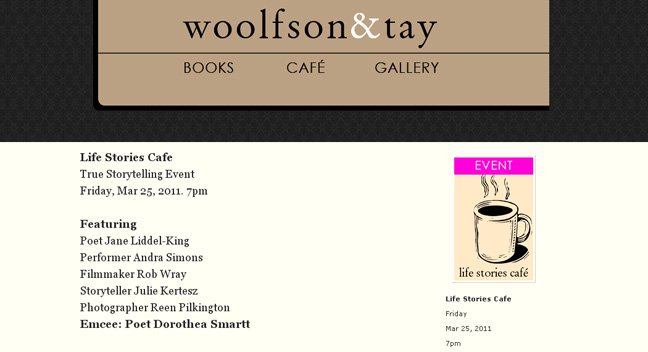 Most of my story will be about a Romance in Paris that changed my life and endured after it flew away. A few hours that left such a powerful impact on my life and my view of relationships and even, myself.

Aie, and here is an event that I do not yet how I will survive: the end of my Humorous Class in School of Comedy night with, each of us a 5 minute "gig" or act, Saturday 26 at 14 h I don't know yet where. Me make laugh on purpose a tough audience... And I just read that men and women laugh at different things.

Tuesday, 29th an Interpretative reading at London Bridge Speakers, a dialogue of Dracula from Transylvania and Mina the English woman. Also only a literary invention, Dracula seems alive to many.
Or, will I tell instead a Humorous Entertaining Story about Dracula and me coming from Transylvania? Also I just realized that Irving come to Dublin from London;;;

The courage of Steve Jobs 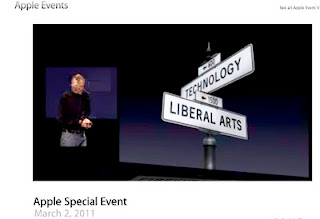 Steve Job presented the 2nd of March 2011, the Keynote for introducing the new IPad 2.

He retired from everyday work of Apple, and is very thin but his courage did not falter as he told us in an more then an hour speech (as ususal with others helping in from time to time) how Cool the new IPad was.

I specially liked this image as he told us about the "post PC era" at the crossroad between Technology and the Liberal Arts.

I admire the way he presents, and always with a black teashirt, only his face and arms visible, and behind, on the screen, dark blue almost black, a very few and very "speaking" images.

His presentations and use of screen can be an exemple of "how to" to all of us. The new IPad with video toward out and toward inside, interesting feature, and two great Apple software (Video editing and Instruments and Mixing) for 5 dollars each! will be available soon in USA and at the end of this month in UK and, then also in hundreds of countries.

My question would be, aside from the price, can one use it now to write with Accents?

Yes, cool features! Steve Jobs performance give us also a courage against odds and adversity.

I was there the day he was outed from Apple by Skuley and have taken a photo of him then as he come to our boot in Paris, producing with our products and Apple's Lazerwriter printer, an add hoc newsletter celebrating him being in the Apple Expo, A long time ago, He was so young then. And yes, courageous against adversity.

A great example of not giving up. Of rebond as soon as possible.
by Julie Kertesz - me - moi - jk at 2:37 am No comments:

Know what you want


Through facebook, and published there by the author of the Naked Presenter, I stumbled on this great speech. Of course, he is right, but what a great example also of personal storytelling enhancing the speech and a wonderful expressive moving face, too!
by Julie Kertesz - me - moi - jk at 7:26 am No comments: