All this great photographers have chosen me as their contacts this last days, but because my eye, it is only today I have looked at their photography. What a wonderful gift!

I favorited in turn some of their images I just discovered, here is from today. 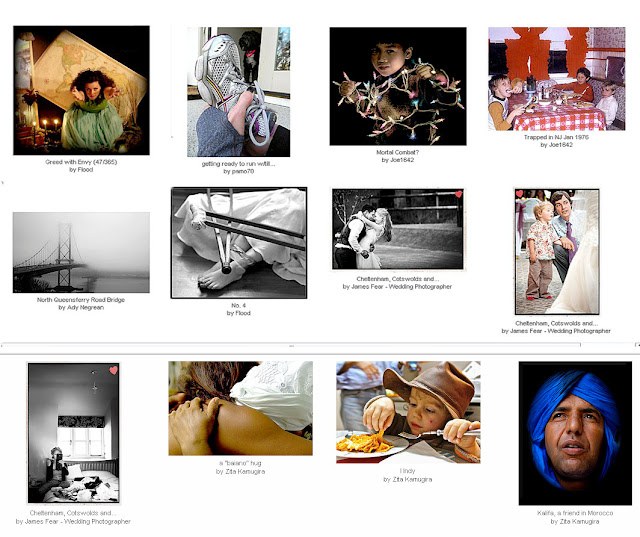 Strange, strong, intriguing, photographes, some strong paintings almost, dreams or special effects, each has in turn given me a strong feeling. And taught me to be more open with my own photography too. Photography on Flickr, what a wonderful way to communicate also with others all over the globe! Some from UK, others from Brazil: or Alasca, the web opens us a whole word and contacts so many human beings!

For my photoblog I needed a black background, and suddenly all changed!
What a difference, it can make. 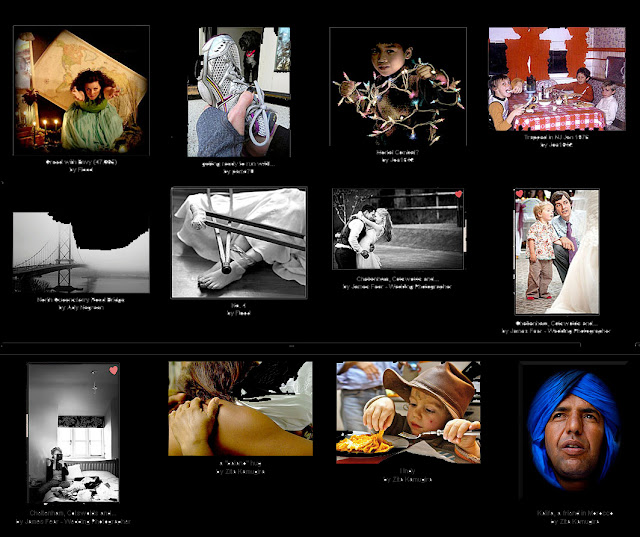 Standup at Angel, north of London

Ben Dunlap talks about a passionate life | Video on TED.com

From TED.com, one of the favorite places to listen to speeches, one of the master storytellers, Ben Dunlop, talks about old Hungarians, with a great appetite for learning and experience, This professor from South Carolyna, with a South USA accent, is one of the best storytellers I have even listened to,

Listen, look, learn!
Of course, it helps that half of his speech, or more, is about an old Hungarian Jeu, Sandor Teszler, who did take from age 80 to 90 all the courses...And I am Hungarian and continue learning.

Ben Dunlap talks about a passionate life | Video on TED.com
by Julie Kertesz - me - moi - jk at 6:22 pm No comments: Links to this post

Everyone has stories to tell - just give them a "voice" 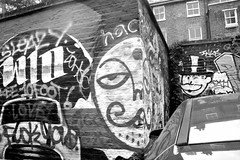 Yesterday I told a story at the Canal Coffee theatre. Not so bad and not extra either.

Yesterday, it was not about me, it was about four immigrants in England, having arrived in London from various continents of the world, to which we have succeeded 'finding their voice'.

Joanna Yates from Spark London had given a True Tales workshop free at Nova Portobello. In this photo, at Brixton Open Mic event she also organizes. 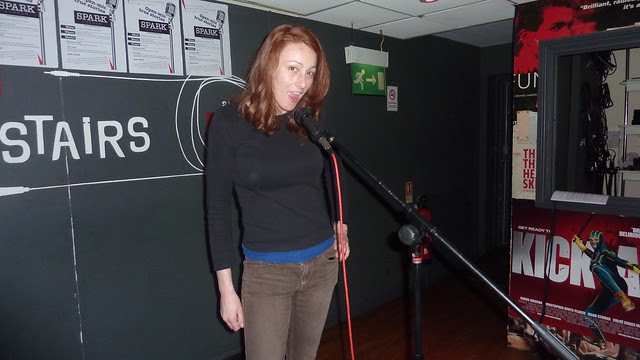 This time, I have had the privilege to assist her and by my example give courage at the beginning, in Septembre.

Iris, a refugee from Chile, now Director of Nova, organization helping people motivated "to obtain their goals." Iris told us of her early difficulties, with authorities and with the language and last night she even showed me an album as "the Queen could not give me the medal of honor of British Empire, because I was from Chilli, but I was invited the Prime Minister's residence, and given it by... look, by him, the son of one of the PMs. "

An old gentleman of 83, Alex, arrived from Uganda, he has full of interesting stories about his country of origin, and even the energy falling on the stage to show us how he fell, when he was a little boy and had cut the feet, using the traditional "knife" inherited from fathers to oldest son, and bleeding even thought dying. He told me again: "you telling the story that first day of workshop gave me confidence" to tell mine's.

Jacinta arriving from India, told us the story of how she put two more years to her passport to be able to come and how the family she worked for in London, used her day and night to work for 16 children and even confiscated her passport. The dentist hearing it helped her (and the police) so she was finally "released" after two years! Now she is married, three children of her own and in London for around 20 years. She told her story with such a brillance!

Tseghe, Etrusquaine d'origine, told to me her story first during the workshop task "how you got your name". She hesitated, how to tell it, and finally she did it brilliantly! Her sister was married at age 11, and she was the only child of her father to be send to school, and she told us a story how 11 year old, she fled from familly and village to a city, there was taken in by a nice but strong woman "do you know work?", met by change her father who finaly let her stay, that helped by the woman's daughter when 14 years to go to Saudi Arabia where she found a job well paid.

She and all of them have many more stories to tell!

All, had no "voice" until Joanna Yates, producer of Spark London did not offer free the workshop of "Personal Storytelling," for Nova Portobello.
by Julie Kertesz - me - moi - jk at 10:14 am No comments: Links to this post 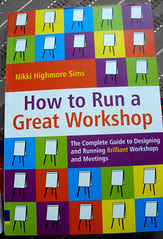 This book that I did not finish yet, explains so well the necessity of interactive workshop.

How each learn differently.

How important is to learn by doing.

How to combine, lecture (seminar like) with doing and interactivity. How can a workshop be divided by higher energy and lower energy.

How to plan and go through them.

Important for everyone who wants to run a workshop or improve on one.
by Julie Kertesz - me - moi - jk at 6:13 pm No comments: Links to this post

An image, a poem communicate and tell a story, too 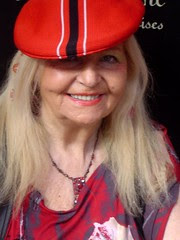 When I am an old woman I shall wear purple
With a red hat which doesn't go, and doesn't suit me.
And I shall spend my pension on brandy and summer gloves
And satin sandals, and say we've no money for butter.

I shall sit down on the pavement when I'm tired
And gobble up samples in shops and press alarm bells
And run my stick along the public railings
And make up for the sobriety of my youth.
I shall go out in my slippers in the rain
And pick flowers in other people's gardens
And learn to spit.

You can wear terrible shirts and grow more fat
And eat three pounds of sausages at a go
Or only bread and pickle for a week
And hoard pens and pencils and beermats and things in boxes.

But now we must have clothes that keep us dry
And pay our rent and not swear in the street
And set a good example for the children.
We must have friends to dinner and read the papers.

But maybe I ought to practice a little now?
So people who know me are not too shocked and surprised
When suddenly I am old, and start to wear purple.

Personal story makes or breaks a great speaker. I do believe in it, more and more do too. Weather in a corporate or any kind of work environment, in politics or community (and even personal life) it is important to be able to express an important idea (point, theme) through a story, a personal story going directly to the audience heart and soul and connecting.

We began a  Personal) Storytelling Workshop at Lewisham Speakers club, meeting each month from 30 November to March, learning and experimenting the different aspects of crafting a great story. there is much to learn and experiment:
At the end, our goal, beside understanding and learning, in an interactive Workshop environment, is to deliver a story, have a showcase, most of us, outside, with Spark London true tales at Canal Café Theatre,  first Monday in March with the theme Change, but also in our community,  to show what we have learned (any story can be also put in a Toastmasters manual project).

We can even have one more meeting to give each other feedback and use also audience's feedback and go on, to another level.