Growing Bolder, 2015 the 3rd May and some interview links

A photo poster with a bit of text published by Growing Bolder, and already 2700+ shares. 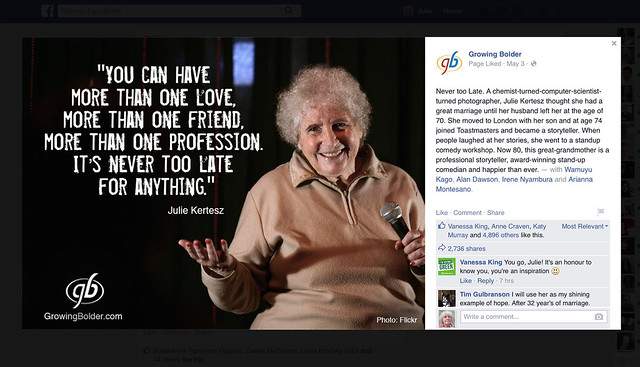 See also some of the interviews, thanks for all the wonderful interviewers!

BBC1 with Julie standup & other memories of films takers 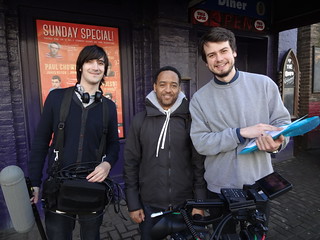 Dee's team come to my house to film in the morning in March 2015. and at noon took me to a Greenwich Comedy club, one of the oldest, Up The Creek.

I have performed at Greenwich Comedy club in 2012... 12 July! As it was my birthday, three pals from my Lewisham Speakers club come to listen. Two of them also begun Standup Comedy later, the third went on to tell tales about his police work with Scotland Yard all around England.

Five hours material, less then 2 minutes result, that used also material from the film "Julie70 standsUp" by Irene Fernandez, and showed some photos I lend to them for the mixing. Where is it?

It was interesting to live through a very professional team work! The sound-taker (at left) who stopped us each time a fire-engine passed through the street. The producer director, Dee here in the middle who directed all of us, asking questions from me and to repeat some answers shorter or better, told all where to stand and what to take. He had in his head already how it would look and how he will make the mixing. And the video camera taker, assisting and verifying how the image come out.

As they left, Dee took with him the disk Irene Fernandez gave me after she made her 15 minute film: she gave us permission to use some of her material and Dee did use three bits from it - I think the most important was the one I was shaving! Shown just before the one taken by the team with me combing at the same place. 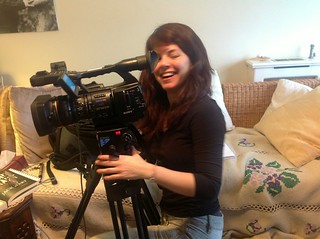 Here is Irene Fernandez, filming me home two years ago.

Alas, as the result had to be only a 15 minute film on big screen at Goldsmith's, many takes were not used and no mention remains of toastmasters activity, on my storytelling, and even not about how I discovered "I have now got comedian eyes".

The new story of the oldest memory on my first told joke remained and they even added the picture of me kid with my mother. No mention of my past career, even if he asked me lots of question about it Thursday.

Well, in a story one has to concentrate on one main message, in this case was Julie taking on Standup Comedy at age 77.

Taken by my Sony camera looking at the television, this is not the original film... of me on TheOneShow in BBC1 - later they had send me a DVD of all the evening.

Julie on BBC1 - short movie from Julie Kertesz on Vimeo.

At the end of my video should go, and I will try to add it:

"Embrace what happens to you, look at it with comedian eyes, use it"
I did from age of 77 learning to make laugh from it.
My name is Julie Kertesz - Always ready for an one night Stand... Up or tell you my true stories.
but do not call me in the morning: Google me, first."

Here is a video from 1st October when I was live on the One Show of BBC1 - the one from yesterday, I have yet to work on it, I will also add it here.

I got in January 2009 to Lewisham Speakers Toastmasters club, and in February I joined both it and  then also Meridian Speakers, so I could speak more. They meet in different weeks (Wednesday 1st 3rd week and Tuesday 2nd and 4th). Each club, offered something else. As I had difficulty to get a speech slot fast, I gave my first project speak "Icebreaker" - titled "and the ice did not break" in March as Mystery Speaker in Croydon Toastmasters Club.

I fall in love then and there.

So, did not stop, since in love. Inside Toastmasters clubs first, then at Spark London personal story telling on stage, or later at one of many Standup Comedy clubs I performed, my love did not change: the audience gave me back that love they felt I had for them.

The first year, I wrote in a notebook I just found what I wrote at the end of 2009, what I did and I achieved, beside getting in November my Competent Communicator award and beginning to tell stories on podium before live audience in Canal café theatre in fall.

I visited a lots of clubs, in London, and even one in Washington, helping and even giving speeches to some. That first year, already, I did not stop to study only from the Toastmasters very good CC Manual which is contains a great but brief course of speech fundamentals.

I did read and study also the following books that first year.
And those are only the first year books that I have now home - some of them I read many times. A lot of others joined them through the years, and I found some gems in each that I could use.

Yes, we do need more material, each depending of course on his or her interest - mine that first year was storytelling as I used stories in all my first 15 speeches.

Then 5 stories for the Storytelling manual, my first Advanced Manual
5 more Entretaining speeches delivered in Toastmasters at the same time as I went to paying audience at Canal Café with different of my true tales till end of 2010

At the end, 2009, I won in Lewisham club Humorous contest delivering a speech "Dare to fail"  how I failed at each of my first six CC speeches. At the same time, I learned the projects well and of course at long, corrected most of the mishaps that happened: analysing, listening, getting back again on the saddle.

With the Revitalised Education Program of Toastmasters, we will have a lot of on-line material that can supplement what we want to learn, and videos, interactive material - all depending on our needs. That does not mean "do not read any more", only that a lot can be delivered online for all those who prefer and got used to work thus. We still will go to our clubs, have our meeting, bonding, get feedback live and get to tell what we learned, how we progressed.