A personal story conquered all!

With a humorous speech titled "Changed by a Tire," Presiyan Vasilev, a 30-year-old sales professional from Chicago, Illinois, won the Toastmasters World Championship of Public Speaking on Saturday, Aug. 24. Vasilev, along with eight other final contestants, reached the championship level after several eliminating rounds that began six months ago with 30,000 participants from 122 countries.

"This is a dream come true," said Vasilev, a native of Bulgaria.

His speech resonated with a capacity crowd of nearly 1,600 from around the world, who attended the contest held in the Duke Energy Center in Cincinnati, Ohio. His winning speech was about the personal experience of reaching out and asking for help.

"I stopped to change a tire; instead the tire changed me," he said. "I believed reaching out was a weakness, but I discovered my weakness was in refusing to reach out."

Vasilev joined Toastmasters three years ago and competed in many speech contests before reaching his goal of earning the title of World Champion of Public Speaking. In his acceptance speech, he said, "Toastmasters is the best personal development laboratory you can find."

Vasilev immigrated to the United States 11 years ago from Sofia, Bulgaria, in search of "multicultural variety" and self-improvement. He found his voice in Toastmasters, where he joined six clubs in Chicago. "I love competing, and I have benefited from the wonderful support of my Toastmasters family," he said. Vasilev says he looks forward to returning the favor and wants to use his championship experience to mentor others. He offers the following advice: "Never give up!"

Speakers delivered five- to seven-minute speeches on wide-ranging topics, and were judged on content, organization and delivery.

Vasilev claimed the title of Toastmasters' 2013 World Champion of Public Speaking during the organization's annual convention held in Cincinnati, Aug. 21-24. Second- and third-place winners were Shurooq AlBanna from Dubai, United Arab Emirates with her speech, "Finding the Pearl " and Kingi Biddle from Rotorua, New Zealand, with his speech titled "My Sitting Place."

In the Royal Arsenal Woolwich -  5mins from the train or DLR (Woolwich Arsenal).

Natalie wrote about my delivery and set: a smashing success !

The brilliant Johnny Kats will MC and if you fancy it just turn up to Big Red Pizza Bus,

30 Deptford Church Str, SE8 4RZ, show 8 to 10ish pls be there 7.45 latest ! Its an amazing room a theatre converted container lorry, behind a big red pizza bus by The Creek. Come on Down.

I will be gigging there for the first time: I am sure not last. Heard a lot of good about it.
by Julie Kertesz - me - moi - jk at 7:58 am No comments: Links to this post

This Monday, open mic true stories: my most disastrous Holliday that changed my life... True storytelling Mic night at upstairs at Ritzy, Brixton with Spark London and a wonderful MC!

And we did have a lot of audiences, wonderfully reactive too. And lots of interesting funny sometimes disasters, from our Hollidays in many countries.

Spark London Open Mike, every third week. Usually Monday. next month: Tuesday with subject Bosses. And Radcliffe, what a wonderful host he is! I begun to be more confident now.

Professional speaker manual: 20 minutes entertain. Of course, adding some information and a dose of inspiring. In Greenwich centre.

I had them with me every second.

So, this morning I am convinced I can.

Next: try 30. I could have gone so far, but for the Meridian club already 20 seemed a lot when they put me on the agenda.

The audience would have listened with pleasure for 30! I am going in the right direction. I did entertain. And given advices on how they can do. Even inspire, that they can.

Very good feedback, lots of laugher all along. Not only I fulfilled my project to entertain but also passed along a message.

Gave them confidence, and gained in myself, too. "Well done Julie!" - Now, just strengthen your conclusion, ending. 3 weeks, three successful stage appearance. One a comedy gig, one a keynote, one an entertaining.

Next week a true story a Upstairs at Ritzy, Brixton. Monday: a disastrous Holliday. A true story. A wonderful place where my soul break. My marriage finished. I was 41. It was the year after, I come to tour UK with my daughter, which I told about this Monday. This time, I decided, well together with my daughter then 12, where to go and when. No one decided for me my Holliday ! One day, I will tell the two vacations together, I think a message comes out from them.
by Julie Kertesz - me - moi - jk at 8:41 am No comments: Links to this post

Giving courage to look ahead


Soon they will be ten years since I write, morning after morning, a note in my French blog "there is life after seventy".

Seven read it first, then fifty, then one hundred and ten, these days according to statistics about two hundred reads what I write day after day. But numbers mean nothing. What is important is to try to give a little courage to one or two who reads the blog notes. If this succeeds, not only would I have proven to myself: There is life after 70 years, but I have the feeling that something was accomplished with it.

Yesterday I received a comment. Blog comments are always valuable gift for me. This time even more. Here it is.

"I'm 70 years old on August 12. I can say without hesitation that I have learned a lot about the subject. You inspired me a new way of thinking, to look ahead even though we sometimes returns and so much more ...

I'll write a note and I would like to quote this little phrase that scares away my negative thoughts. "There is life after 70 years" and of course put a link to your blog. Answer please YES or NO.

Do not forget to wish Sue all the happiness August 12! You can find her blog and email at the right of my blog, between those I follow. But also, in my commentary note yesterday about Dauville.

I remained very humble and happy at the same time, to have been able to inspire 'look ahead with more courage'! What an encouragement for me to continue.

Yesterday, for the first time in my clubs, I spoke for twenty minutes, and I managed to make all laugh many times. Have fun at the same time inspire them that is never too late to start looking through the eyes of comedians. A gentleman who came out at the same time as me from the club and waited at the same bus station, he told me: 'you have so much energy'.

He did not know all the hours of discouragement, doubt me, fatigue, between meetings and writings and speeches. The energy comes and goes, then accumulates more times. Receive such a commentary, such lines as those of Sue filled the fountain again!

Meridian speakers club, Tuesday 12 August - meeting begins at 7 pm
"Having arrived to last level in communication and leadership, Julie Kertesz just got Distinguished Toastmasters. She went for three days in Las Vegas mid July at Toastmasters Champs Bootcamp where she spend three days under the leadership of Darren, and the wonderful Judy Carter who after being comedian and coach, gave motivational keynote speeches, and then wrote a book to help others do it to: the message of you. Find out what they need and stories of how you learned from your 'mess' coming out to success: YOU can do it too. "

Are you having the summer from hell? Did your dreams of a peaceful holiday end in arguments and faulty air-conditioning. All is not lost we want to hear your stories and tell you a few of our own.
Theme: Holiday disasters
My decisive Holliday near lake Granada, Julie Kertesz.
Venue: The Ritzy Picturehouse, Brixton Oval, Brixton Oval, London, SW2 1JG, UK - map
Possibly in September also as it is such a delightful theme:

How does it feel to be in a completely strange environment? Where were you and why were you there? How did you overcome the experience and return to the water?
Theme: Fish out of water
Venue: Canal Cafe Theatre, Little Venice, London, W2 6ND, UK - Website - map

At The cult of comedy, West Ham 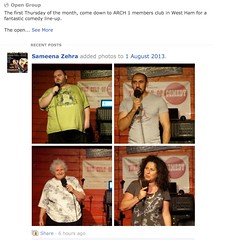 For of us performed, I was after the pause the first: killed!

Many laughs, long and strong.

Kevin Connerley, wonderful voice, laughter! Here, first. Just wrote me: Julie, you are the one who wrings the laughter out!

Judy Carter advices helped too: I used more 'acting out' then before. Also I slightly modified the set's text.

And adapted to the occasion with a callback: never too late! To an audience that did arrive late.
by Julie Kertesz - me - moi - jk at 7:52 am No comments: Links to this post

Back to comedy, tonight: solid 10' laughter! 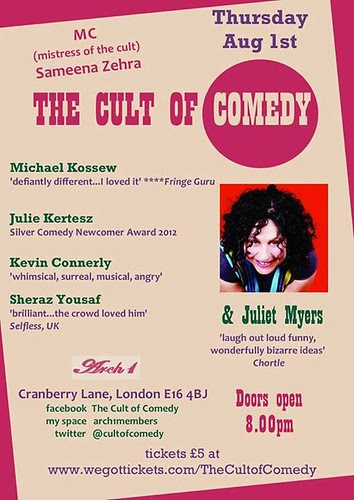 It was a great night for me.

First, no one came.

We waited to see if the show will be cancelled and used it to chat.

Almost an hour late, suddenly the audience arrived. Warmed up slowly. As they arrived to my set: it went most wonderful! Almost no stop laughter and strong and long! Plus Kevin has such a wonderful strong laugh! And also at least three special applause in the middle for some lines they specially enjoyed.

At the end a couple asked: really, you gig only for one or two years? Amazing: you are sooo good!
by Julie Kertesz - me - moi - jk at 7:11 am No comments: Links to this post