Years passed, time for thinking about them

Toastmasters completed manuals and projects from 2009

After I finished my AC Gold, the highest in Communication thread at Toastmasters, I begun again at the beginning, with better understanding now, in 2012. Then in July 2013, finished the highest Leadership. That is how I become "Distinguished Toasmaster" which means only that I did learn a lot and gave many speeches and helped the club and other clubs later on too in leadership roles too. 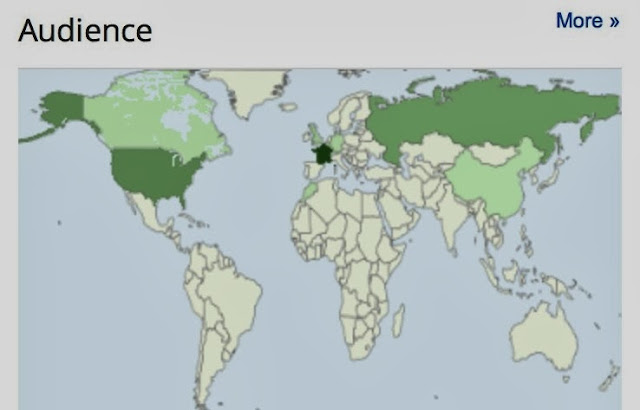 This is a picture showing from where comes the audience for my flickr pictures. It also explains why it is growing all day long as the dawn comes or the sun sets all through it. This days, I had a pic of more then ten thousand but mostly they go around 7000 hits by day. I wonder if all people?

Audience for my French blog "il y a de la vie après 70 ans" comes mostly from France, but also many from USA, Russia and even UK, Germany, China, and then other French speaking audience, as Canada, Belgium, Switzerland, and even Morocco!

I can not measure my Standup Comedy activity only by saying that I did begun at age 77 and I did arrive to the goal: 77 gigs now behind me. I got a few cups and won some awards, mostly last year.

This year, I gave Storytelling workshops and a first Keynote and begun organising bigger meetings.

I do not consider it an accomplishment, but a movie was created and projected on huge screen at Goldsmith university on how my life is reflected in my standup comedy activity, two short TV videos, and two new newspaper articles about the same. It seems more surprising then my other activities but for me there are just part of learning - and enjoying the audience.

My new year resolution so far: speak about those "perfect moments" in our life, or better call them Magic Moments?

the film "Holliday in handcuffs" ended with that phrase told by the heroine of the film."There is no perfect job, perfect family or perfect life, but there are those perfect moments" - we have sometimes to do some crazy thing, go out of our comfort zone, dare, to arrive at some point to those moments,
And yes, I did have some Perfect Moments, Magic Moments (some longer then others) that I do remember now with joy.

One of my Perfect Moment this year, where the 2 minutes "elevator pitch" I gave to an audience of 80 a Sunday lunchtime in Los Angeles, at the Judy Carter's conference on the Message of You.

Before me, a few other went, and did exactly as they were told, after the formula we got at the conference the day before. It seemed to me as if they where puppets. Deciding, it is more important to reach the whole audience, instead of the 5 judges I changed the 'rule' and followed my instinct.

I did succeed!  from the beginning (with a story on how officials from the passport control in the LA airport views me) to end (with other short more humorous stories) and I did hold the audience in my hand, charm them, make them react and feel with. It was a perfect moment with the audience!
by Julie Kertesz - me - moi - jk at 7:54 am No comments:

Just discovered this on Manhattan comedy school - through google search

…But The Jokes Are New!

Posted on February 20, 2012 by Emily Rosenberg
Doing stand-up takes nerves of steel, a thick skin, and lightning-sharp mental reflexes. Maybe that’s why it’s always been a young person’s game, at least when you’re starting out.

Not anymore. Over in the UK, Dave’s Leicester Comedy Festival, the longest running festival of its kind in the country, just hosted the first Silver Comedy Stand-Up of the Year competition. The only requirement for eligibility is that comics must be older than 55. Or, their laugh lines must be on their faces as well as in their material.

The event was born after LCF chief Geoff Rowe talked with his mother’s 70-year-old friend, who’d never been to a comedy club and told him, “I’m too old. It’s not for the likes of me.”
George Baddeley, managing director of Silver Comedy, which conducts comedy workshops for mature individuals, said, “You don’t see new people breaking in who aren’t young – this is a chance for them.”

The fact is, a vast number of vaunted comedians are still going strong at AARP-eligible ages, including 69-year-old Billy Connolly, who just last month was voted “most influential comic” in a poll of fans and top stand-ups in the UK.  In 2009, a 75-year-old comic named Grandma Lee was among the 10 finalists on America’s Got Talent. And look how Jackie Mason, Joan Rivers, and Don Rickles are enduring, with careers still thriving in their golden years.

The Silver Comedy contestants included 24 comedians, both veteran and untested, male and female, some as advanced in age as their 70′s and 80′s. After presenting a three-minute set in the first round of review, the final 10 selected had the opportunity to perform before a paying audience of about 100.
The coveted golden microphone went to 63-year-old transsexual–and seasoned stand-up vet–Shelley Bridgman.

Seventy-seven-year-old Julie Kertesz, who was glad to challenge stereotypes about seniors, was awarded Best Old Newcomer. An immigrant who’d never used profanity before she climbed on a stage, she now acknowledges that four-letter words earn her laughs. Kertesz’s act also includes riffs on senior sex lives and her husband’s fooling around.

Most satisfying of  all had to be the audience reaction that night. As one mere child of 18 reported, “I know it was specifically older comedy, but I didn’t see it as that. I just saw it as good comedy.”

Thanks Emily! The award was : Best Silver Comedy Newcomer 2013.

Dave's Leicester Comedy Festival,Grandma Lee, Julie >
by Julie Kertesz - me - moi - jk at 8:05 am No comments:

How we remember new things?


The "working memory" is storing new things and connecting it to some old. Alas, it has a limited capacity. Peter Doolittle said we can remember 4 to 7 things "unless we do something about it".

That is very important for us public speakers, storytellers, comedians.

How can we remember, how can we make the audience remember?

The strategies he proposes, all would have to be investigated and spoken separately, he does not have a lot of time for it in this TED talk. But he proposes some of them to us how to process them:

- Process what happens as it happens so we could use it later
- Practice, use them, play with them, repeat them
- Embrace the new as it arrives with old knowledge, connect them
- Use imagery : think in images (that is what come more easy to me)
- Organisation and support: I do not know what he means by that

And of course, he begins with a short story (anecdote) : do you see what happened to him after you listened to this speech? I do as if I was still there on the street with him.
by Julie Kertesz - me - moi - jk at 7:20 am No comments:

A new tiny camera: from panorama to macro

A new tiny camera, almost lost in my hand, a new Sony Cybershot that I had to buy as my camera broke in Budapest for some reason I do not even understand. But what a joy with a new camera!

It can do a panorama or an image with high resolution from which one can crop this as above. Or it can go near and do a macro picture of a plant or rain drops. Very far, very near, very wide too. 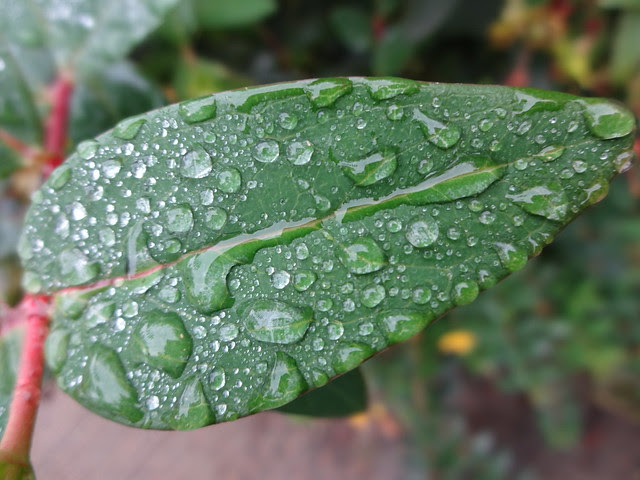