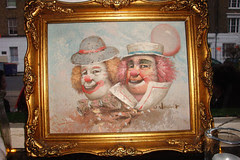 The two clowns between 16 comedians, The gig is called "Comedy Virgins" but in fact we had only one between us who has just begun. The others have done if already a few times...

The venue was full, some even standing in the back.

At the end, we were voted by cheers ans applause, as the best two yesterday, Tuesday evening by the audience where 2 women, I was the one who came home with the tiny cup. 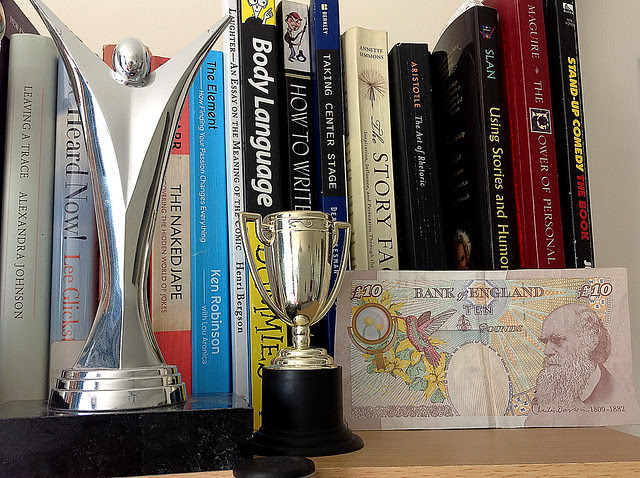 I almost like more the sound track that my small recorder has taken. What a wonderful public in Cavendish Arms! They gave me such a warm welcome.

Why the same number produces so different reaction from one to other?
My daughter-in-law (that I mentioned in the gig) took videos from the back and I realised that a impromptu joke about her (and not minding my language) added laugher after laugher.

Finally, I also dared to try out more new material and most of it worked well.

Now, I have ten minutes, even if I can tell only five at a time most places. Each time, we learn something new. This time, I learned more about "try out, see what works, write down if not yet done." Also, that when I change, I have to learn again the thread, the connections, if I do not want to leave out pieces.

The Open Mic circuit for Stand-up Comedians (but also storytellers, public speakers) is a great way of learning! And I am lucky to live in London. Going to one is no more that one and half hour usually. Three hours going and returning. Yes, for five or seven minutes that I prepared and I refine all the time.
by Julie Kertesz - me - moi - jk at 6:00 am